Redefining and positioning the forgefriends project

Forgefriends has a defined scope. Its goal is to address a problem by working on ideas that leads to concrete outcomes which are expected to have an impact. It was articulated about ten months ago and some elements should be trimmed because they are somewhat obsolete.

It is my understanding that you think this definition and this scope are too narrow and should be changed. I also think that when you write:

you have mind software that are not in the current scope of forgefriends. If my interpretation is correct, I would be grateful if you could expand with a few concrete examples.

So re-arranging my thoughts, sketching…

…and that may need to be further improved.

In reply to you @dachary the “our” refers to We The People, so indeed not part of Forgefriends. Both Forgefriends and Social Coding focus on the free software development lifecycle, and the latter possibly more broadly so, in scope. And different in nature on what is focused on and how people participate in general.

The current scope and definition is very long and detailed, with a lot of specifics making it hard to determine what is in scope and what not. Given the potential of the concept of “forge friends” and taking into account a position that is as attractive as possible for people to help realize it in all kinds of ways…

I would try to come up with a Mission and Vision that gives a frame of reference to the space that Forgefriends occupies, without being restrictive to the creative solutions that may exist within. Like e.g. …

That can be improved, of course, but I think you get the idea. I didn’t even mention ‘federation’ as it is a technical concern, and may just as well that P2P is used and many other means that help democratize forges.

And you get something along these lines conceptually as the umbrella structure that Forgefriends represents: 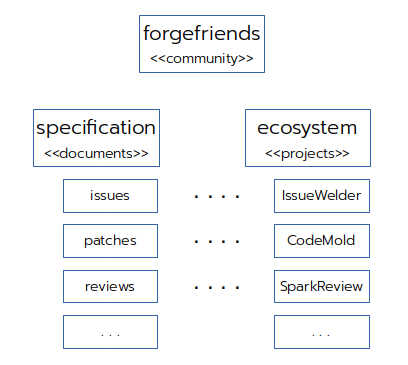 The current scope and definition is very long and detailed, with a lot of specifics making it hard to determine what is in scope and what not.

Could you please give an example? I assume you do not refer to the umbrella concept because I think it is quite clear that is not in scope.

I would try to come up with a Mission and Vision that gives a frame of reference to the space that Forgefriends occupies,…

I think forgefriends occupies the space that is defined by https://coding.social/. And there could be an intermediate space such as forges.social to be defined as you suggest:

all it needs is a different name and voila

all it needs is a different name and voila

Could you please give an example? I assume you do not refer to the umbrella concept because I think it is quite clear that is not in scope.

What I am trying to convey is a positioning of this community such that it can facilitate any initiative started by arbitrary “forge friends”, i.e. any project dedicated to the Mission and Vision. How might that looks like?

My first idea, described above:

That is a possibility. Another variation is… forget about forges.social. We already have coding.social:

I named the specification track “Forgefriends Free Software Lifecycle” just as an example for an aggregate name that breaks down into “Issue Management”, “Code Review”, etc. specification documents. The specs would follow up where Forgefed ended.

That specification track would then be part of Social Coding documentation website, together with other specs that fan out further (e.g. Ideation).

That is a possibility. Another variation is… forget about forges.social. We already have coding.social:

Agreed. If someone is willing to work on forges.social it can happen. But I’m not sure anyone has the energy to create such an umbrella right now.

This last variation is where we almost are right now. It means both Social Coding and Forgefriends accepting this relationship, and any other initiative that is part of “forge friends” ecosystem and on this forum should do as well. I think it is very attractive in terms of positioning.

In Positioning Social Coding and Forgefriends - #2 by aschrijver I have elaborated on the third variant I described above.

Here’s a quick diagram of the “Forge Friends” concept, that demonstrates the pillars on which it stands. Note that its just a bit of brainstorm right now. 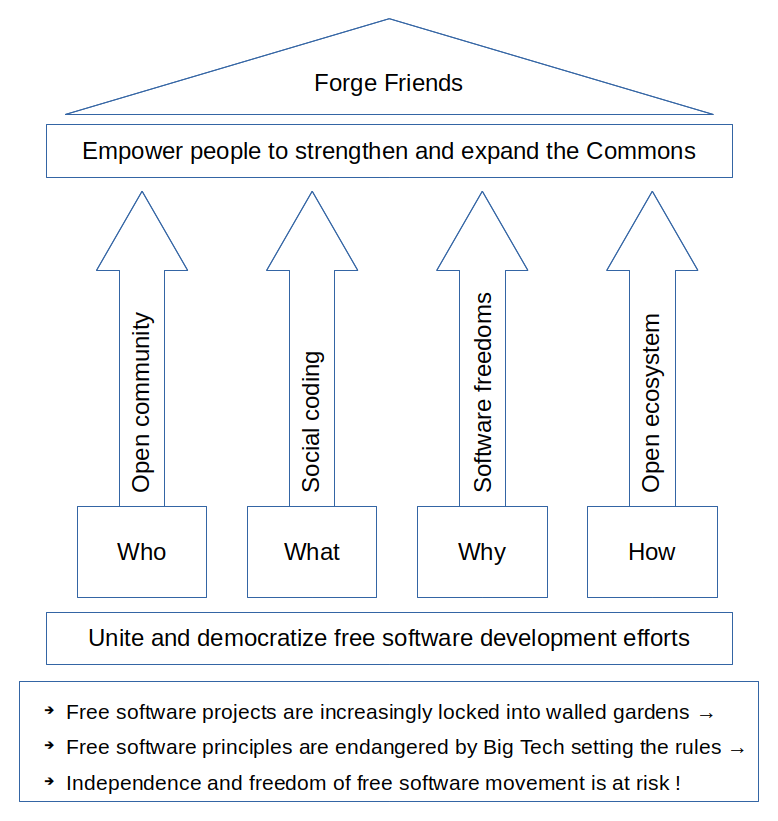 Btw, I am still unclear on your and @pilou’s original perception on what (then) FedeProxy was meant to be. To me it appeared as:

Whereas I was and still am thinking more like:

My perception may be totally wrong, and you may just have preferred a different approach to come to something that is very similar. If that’s the case then I still think you’ve set a road that’s likely to be unnecessarily long and hard. With my repositioning I am trying to increase the success criteria of your original idea (the proxies), the likelyhood of a growing community of active contributors to emerge, and the opening of additional opportunities by shining a light on the possibilities and enormous potential of ‘forge federation’.

All my energy is dedicated to having an ongoing productization track, which I felt was missing in the “idea → user research → code” approach I perceived. I wear a “product owner” hat when writing all this (please don’t fall on the term, just refering to a common role in software dev).

When I look at the forgefriends.org website, I see missed opportunity as well due to the lack of productization. It will lead among others to fewer contributors than you might have had already. I feel you may fall in the trap of being overly tech-focused.

I have spent way more time in the forgefriends community than I ever intended to (as said before, my priorities for the Fediverse lie in a different direction). The fact that I spend it was my curiosity of 1) What is Forgefriends actually? 2) Do you realize the enormous potential of Forgefriends? 3) Do you intend to realize Forgefriends to its maximum potential? and 4) How can other people become motivated to do so too?

There is value in expressing your visions, ideas and criticisms.

Some of them are seeds that blossomed because someone worked with you to implement them (the name and logo change is the most luminous example). Others became a reality just because you voiced an idea once and someone decided to act on it and committed to finish it (the webinar is the most recent example).

Since you have many ideas and you see quite clearly what is lacking in forgefriends (and other initiatives), it stands to reason that most of the time nobody is available to work on them. Which can be frustrating and discouraging when you contemplate the magnitude of the work that lies ahead.

I also understand that you can be frustrated when I do not focus on what you think is most important. But in the end it is up to me to decide how I spend my time. In my opinion it is the right balance between what forgefriends needs to move forward, my skills and what makes me happy on a daily basis.

I also understand that you can be frustrated when I do not focus on what you think is most important. But in the end it is up to me to decide how I spend my time. In my opinion it is the right balance between what forgefriends needs to move forward, my skills and what makes me happy on a daily basis.

Frustration is the wrong word, because I’m not. More fascination with the opportunity. Of course I am in no way trying to make you spend time in any way different than how you want to spend it. With my inquiries I am also trying to find how I am willing to spend mine

I think that you make a significant difference by spending time on forge federation (not just forgefriends). Without you, the majority of the work done is on writing software. You bring balance to the forge (pun intended)

Here are ideas of name for a project that would encompass both forgefriends and forgeflux, while being under the umbrella of social coding:

forges.social also seems to be available

But maybe there should not be so much focus on “code forge”, rather: Set your code free…

We have a list of some really nice names, I propose we hold a public poll on the first of May and acquire the winning domain.